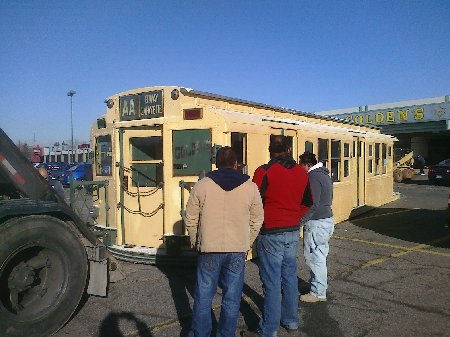 They took the subway car out of Golden’s Deli today.

Golden’s wasn’t Katz’s, where Smitty took me a couple of months ago. But it was a real kosher deli on Staten Island, where knishes and pastrami aren’t as automatic as in the rest of New York City. And Golden’s was a family business that was thriving on Staten Island when I first got here, which is more than twenty years ago.

Their food was good but the magic, when my son was growing up, was the subway car – an ancient monstrosity with 200 coats of icky tan paint, overhead fans, wicker seats and tables inset under posters for Virginia Slims cigarettes, Ali vs. Frazier on Pay Per View television (!) and Elvis in Concert. 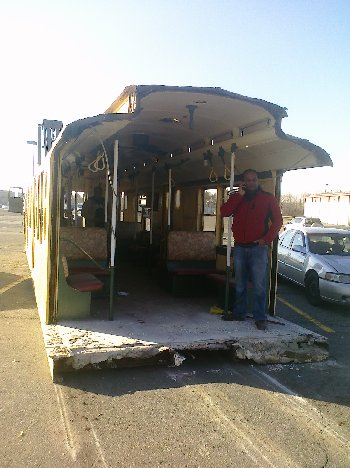 I remember both the cars and the posters. My son had no such memories—the car might as well have been built for Charlemagne, as far as he was concerned. What he knew was he could get a really good burger and thick crinkle-cut fries and sit in a subway car while eating them! The thrill was there when he was 10 and coping with his parent’s divorce and it was there a year or two ago, when he was 6’5″, in college and into video games and filmmaking.

So it was dizzying on several levels to see that subway car in the middle of a parking lot at 9 this morning. It was a piece of my life yanked out of place.

The crew attached chains to pull the thing onto a flatbed truck. Where’s it going? I asked the foreman. Brooklyn, he said. To storage. The family is looking for another location but, in the meantime, have to have a place for it. Is this the biggest thing you’ve ever moved? No way, he said, voice rising, we move everything. You name it, we move it. We move whole buildings, jack ’em up, move ’em all over. 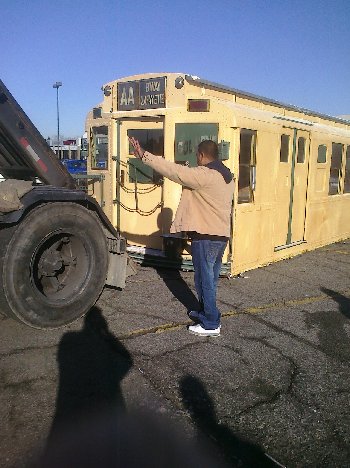 the chain broke a second later

A minute later, the chain pulling at the nose of the car snapped and thick metal pieces flew Godknowswhere. The crewman started laughing and pointing at the driver. ‘You said it wouldn’t hold!’ he said and the driver puffed up a bit, being right and all.

They replaced the chains with stronger ones and pulled again and this time, got the job done. As I was walking away, the foreman was on the phone to someone, saying ‘You’re escorting us, right? Okay, a few minutes, you’re escorting us.’

The owner of the Deli walked by – I asked him if he wanted to be in the photo. He shook his head. “It’s not a happy day for us,” he said. It’s an old story—the strip mall raised the rent so now the Deli’s just another empty storefront, to be replaced, surely, by some chain store that will shrug off the cost and add to the creeping sameness of America.

But what I felt, watching them haul that subway car onto the flatbed, is my son living now in Virginia while another of the places I connected with him is on a flatbed truck, heading for storage.