↓
Home→My Books→Mindbenders 2: The Fiery Sky
“I read this opening line—‘The man tied to the slab means nothing to me’—at precisely 7 p.m. The next time I looked up, dawn was peeking through my windows, and I thought, I’m gonna be a sleep-zombie today, but I don’t care, ‘cause THAT was some mondo terrific thriller writing! This novel is a dead-bang winner, and if you don’t go grab it, you’ll kick yourself when the bookstores run out. Four thumbs up for MBII!”
–Bestselling author Shane Gericke, THE FURY’

“Ted Krever’s MINDBENDERS…now has a sequel. Ted is smart and talented and a superior storyteller. Get MINDBENDERS 2!”

–F. Paul Wilson, author of the NY Times bestseller ‘The Keep’ and the Repairman Jack novels

Mindbenders 2: The Fiery Sky has arrived!! Order it here on Amazon!! 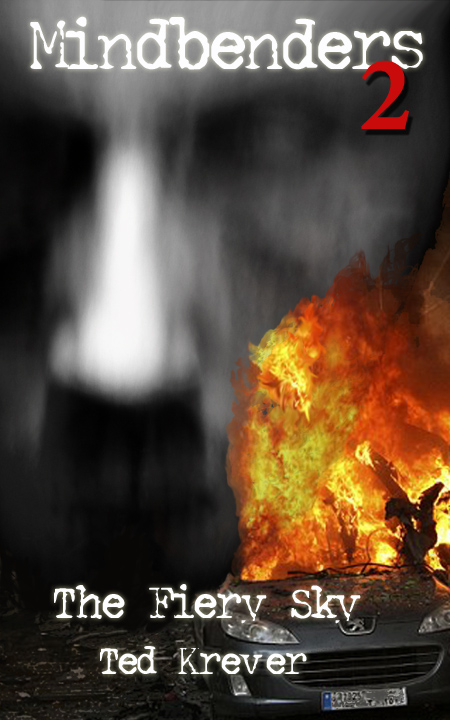 What if your thoughts were not your own?

There is a war—a silent, invisible war—raging right now, around the world. The battlefield in this war is the most private and sacred possible—your own thoughts.

On one side is L Corp, a multinational empire of mind control contractors for hire, brainwashing the public, pushing useless products and perverse politicians—and disposing of dictators, presidents, scientists and pesky dissidents with inconvenient messages along the way.

Arrayed against this international conspiracy is Max Renn, formerly the Soviet Union’s premier mindbender agent, and his small team of paranormals.

In Mindbenders 2, Renn and his Mindbenders team race from a murder-without-clues in Belgium to a floating village in the South China Sea, from an amphitheater in Africa to the Australian Outback, facing a terrifying new opponent who uses Renn’s deepest secrets to betray him.

Because the most dangerous enemy is the one in your own mind.

Click here to read an excerpt and see a video.