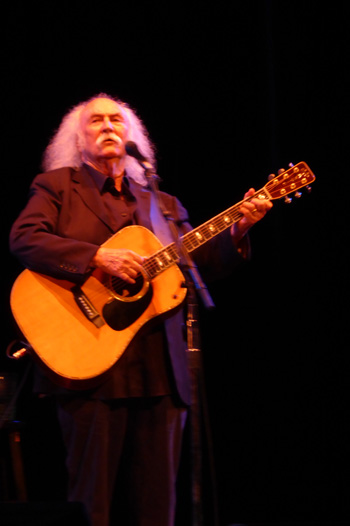 All photos by CO Moed

David Crosby was never my favorite.

First it was Stills, then Young. Neil gets all the headlines and respect. Young musicians revere him and play with him. He gets interviewed on Colbert and parodied by Fallon. Stills faded away long ago, Nash is a gentleman, an amazing singer and a fine tunesmith but only occasionally an interesting songwriter.

And then there was Crosby, the egotistical drug maniac, crack addict, heroin addict, cold-turkey veteran of a Texas prison in the mid-80’s, liver transplant veteran since the mid 90’s, sperm donor for Melissa Etheridge’s in-vitro kids and talking head de rigeur for every rock documentary of the last fifteen years. He’s joked for ages that Stills wrote the anthems, Nash wrote the hits and he wrote the weird shit. He was a punchline – so what about him?

What about him is a rebirth at an age rock stars are supposed to be irrelevant, maybe still playing but certainly not growing. First, he formed a band called CPR in the Nineties with his biological son James Raymond (a very talented keyboard player/singer/songwriter in his own right). That band left behind many tours and several now out-of-print albums that didn’t sell much but are continually on top of my playlist. Their live versions of Byrds and CSNY songs put the originals to shame.

Last year, Crosby put out a solo record that offered far better songwriting than anything Neil has done in a decade. He backed the record with a full-band tour and those shows (I saw one and have heard several) were terrific, starting with the album in it’s entirety, followed with gems from the long career. 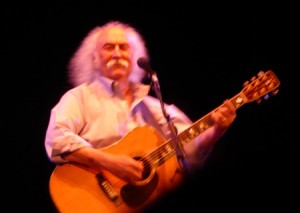 And this past Thursday night, he played Town Hall in New York solo – just one man and many open-tuned guitars – something he’s never done before in that long career. And he killed it.

His voice is amazing, taking a few songs to warm up but reaching powerful high notes no 73-year-old should even attempt and showing an ability to shape melodies and sell a lyric better than his young self ever could. He played back-catalogue songs I’ve loved for years without ever hearing live (‘Laughing’ ‘In My Dreams’) and found new life in songs I’ve heard many times before (‘Guinevere’, which I thought I never wanted to hear again – I was wrong).  A front-of-the-audience member told Crosby to stop talking politics between songs and sing – Cros told him to go fuck himself, to general chuckling from the rest of the crowd.

The songs were fascinating, especially stripped down like this. The depth of the chord changes reminds you that this is the man who taught Joni Mitchell to open-tune and introduced George Harrison to Ravi Shankar. The sounds would have been profound without the words. And the words were wonderful. ‘Fluttering pages of faces’ is a great image even when he explains it (I’m not blowing the story here). 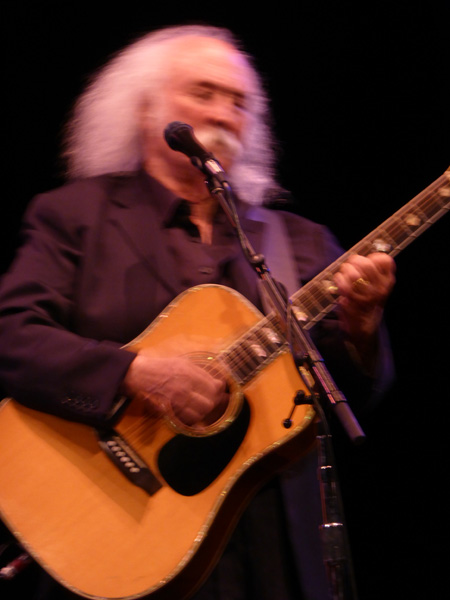 The best news was, two of the five best songs of the night were brand-new. One of them was a jazz-inflected number with lyrics that denied the sexism traditionally associated with 60’s Rock Stars.

It was a great show on all counts.

It’s kind of stunning. I look back now on a band I’ve followed over forty years (through fifty permutations) and at the very end, when they should be way past over-the-hill, the most unlikely guy has become my favorite.

If he comes to your town on this tour, just go.