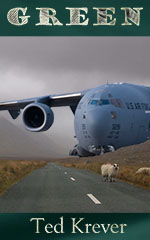 ‘Green is a delightful book. Written by Ted Krever, it’s a smart, witty and wise look at love later in life by a writer who’s . . . well, later in life. Green couldn’t have been written by a younger man; there’s too much hard-won wisdom in its pages.

Fifty-something Paul Roget has been invited to Ireland by his college friend, Emily Ormond. Paul is a former on-aircelebrity–a business news reporter who’s been out of work for a year. Paul is currently repping the “Getaway Bed,” an eleven-thousand dollar sleeping environment being marketed as an antidote to stress in a post 9/11 world. Paul does manage to sell the Getaway Bed franchise–and meets one of the book’s most fascinating characters in the process–but the bed is only an amusing sub-plot.

Green is not about beds or bed salesmanship; it’s about love. In fact, there’s so much love in the air that–just like the beautiful light in Ireland–every character seems bathed in it.

First, Emily and Paul have an attraction, a push-pull that has existed since their college days. Emily herself is wondering if she might be gay and has a giddy, stammering crush on an art dealer named “Maeve” who’s sexual preference is, as the novel begins, unknown. Then there’s Malcolm Lowell. Malcolm is Emily’s “horse landlord,” a world-famous rider, a dashing Colonel in the Irish Defense Forces and, initially, Paul’s rival. Malcolm is also steadfastly in love with Emily and is waiting patiently for her to realize it and fall into his arms. And then Paul meets Jillian: a poet, a barmaid, an anti-war activist, and a bold, challenging woman who beguiles him as much as the beauty of Ireland is starting to do. And, they’re off! 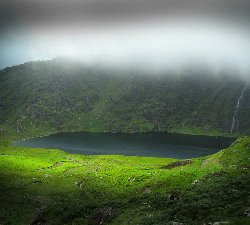 If I’ve made Green sound like a bodice-ripping romance novel, I apologize. It’s not. Green rests solidly in the literary novel genre.

Ted Krever’s characters have all been wounded, but they carry their wounds with them in their search for love and happiness. Emily has survived the death of her husband, Dyson. A beautiful woman, she’s also a cancer survivor. Here she talks about life after chemo.

“I just don’t want the sex, which is the only thing anyone thinks of. But I wanted to be wanted. Doesn’t everyone? I’ve put so much of myself into…this,” she ran her hands across her shoulders and breasts, her belly and hips and thighs.

“Desire. It’s the most powerful constant, more than money or power or love. Anticipation’s better than reality, over and over. And I’m going to have to give it up—soon. Women’s bodies wear out faster than men’s. I might be a better person when it’s gone—but I don’t really believe that. And I surely won’t be the same. It’s my power. No one gives up power in this world voluntarily. Not countries. Not people. No one.”

Paul’s romance with Jillian is central to the tale. In this passage, he is leaving her apartment at dawn. 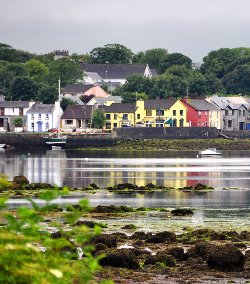 “I spotted the signs before reaching Jill’s front door. Alongside the radical’s library—Marcuse! Das Kapital with pages thumbed and notes scribbled in margins!—two pair of jeans way too big for her perched atop the laundry bin; a pile of music magazines sprawled across the cheap coffee table. I wasn’t checking—they were just there. There was another man who made himself comfortable in this apartment. It was the reason she’d dragged me through the living room when we first came in.

I held back the protest inside—what was the point? It was just one more place in life where I had no say. She was funny, lovely, uninhibited and skilled at charming and juggling the attentions of all things male. I’d had my romantic dream; now here was reality. I pulled the door closed and marched up the hill toward Em’s house.

Green is funny, too. Krever has done a wonderful job with the descriptions of Ireland. Here’s a small village market:

The packages on these shelves were simple and functional, designed by some underpaid artist in a back-room instead of an army of marketers and seven terabytes of extrapolated focus groups. The milk in the stand-up refrigerator said ‘Lisheen Creamery’ above a simple line drawing of the bridge at the center of town. Chrome and glass cabinets displayed fresh-cut meat and cheese. Next to these bits, American produce looked cartoonishly unnatural, inflated helium and candlewax, hype and hubris. I wondered how expensive it would be to go vegan when I got home.

Green is a charming book. Ted Krever writes with a sure hand and a light touch. The lightness, love and witty dialog made me think of A Midsummer’s Night’s Dream, so I can heartily recommend Green to anyone who enjoys a rich love story — and feels like taking an armchair trip to Ireland.’

I was at first reluctant to accept this book to read and review, but after my enjoyment of Ted Krever’s “Mindbenders,” I decided to give it a try, and I am glad I did so. While I am not a fan of romance or typical women’s literature, this story provides something different – something real. It would provide too many spoilers to even attempt a plot synopsis. “Green” is about life, love and belonging; it is about desire and being desired; it is about gaining a new lease on life by allowing yourself to truly feel. While the author has described it as romance, it is not your typical romance story – I’m not sure how else one would describe it, but do not go into this book thinking you will be reading anything typical. This novel is, quite simply, about people; their desires to be wanted, and their effects on those around them in their struggles to belong.

Paul (formerly somewhat of a star in the television business world) and Em (a horsewoman and painter who has homes in both Ireland and the U.S.) have been friends since their time at Sarah Lawrence University; while Em has made it plain she would like a relationship with Paul, he simply does not feel the same way about her, despite how much he loves her. She has invited him to come to Ireland to spend some time with her there. While there, Paul will learn the difference between just surviving and really living, and that truly living, while chaotic, is also exciting. Ted Krever has really hit the nail on the head, and has given us a unique look into the mindset of men, rather than the typical romance, which is told from the woman’s point of view. While the overall story would be considered drama, there is also a great deal of subtle humour and I found myself laughing aloud more than once, only to shortly thereafter find myself deeply touched.

The descriptions Krever gives of Ireland are alone worth the price of the book; but the whole story is beautifully done, smoothly plotted and brilliantly executed. I can highly recommend this book to anyone who enjoys a good story, no matter what it is about. If you like reading about horses, Ireland, friendship, love in any form … well, the list goes on. Give “Green” a chance – I truly believe you will enjoy it.

A Colorful Portrait of Middle-Aged Angst., June 27, 2011
By William Marantz “willie” (Winnipeg, MB) – See all my reviews
Amazon Verified Purchase(What’s this?)
This review is from: Green (Paperback)

After reading Mr. Mckenna’s review I see that I needn’t go on at length.

So I will merely say that the appeal of this novel does not lie in a paint-by-numbers plot but a muscular prose style and in-depth exposition of complex characters. At one point the protagonist, Paul, a New Yorker on vacation in Ireland, comments on the unspoiled beauty of the countryside. To which his female companion, who owns a cottage in the area, informs him that the English denuded Ireland of trees (for shipbuilding) centuries ago; that the scenery he is admiring is man-made.

That could be a metaphor for this entire novel.

The difference between appearance and reality is a theme that does not only extend to the vividly described environment but the equally vivid characters. Emily, for instance, a patrician beauty who is treated like a Queen by friends and strangers, turns out to be a flawed and insecure human being while her rival, Jill, the lowly barmaid, turns out to be anything but.