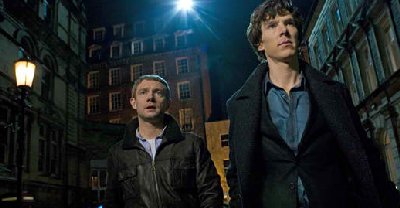 I’ve been watching the amazing ‘Sherlock’ on PBS lately and then went back to the first episode on Netflix last night. Smitty turned me on to the series but she shouldn’t have had to. I was a little put-off by the description: Holmes and Watson as young guys in present day, Watson a blogger back from Afghanistan, Holmes obsessively texting, sped-up editing a la the Bourne films, etc.

None of that matters. My argument for years has been that Sherlock Holmes is the Shakespeare canon of mystery and suspense – the stories will be reworked and new ones added, endless interpretations and viewpoints to the end of time. The essence of Sherlock remains – the difficulty of being brilliant. Poirot was Sherlock – Agatha Christie admitted it. ‘House’ was Sherlock. So, at times, was John Lennon. Brains to burn and utter impatience at routine. Seeing the world with more vivid eyes than the rest of us.

That is what makes the new series so wonderful, that same conundrum of brilliance battling ennui wrapped in the new language of filmmaking and the new frankness that allows the show to toy with Holmes’ sexuality (or lack thereof) in a way previous versions (Billy Wilder’s ‘The Private Life of Sherlock Holmes’ the rare exception) couldn’t. 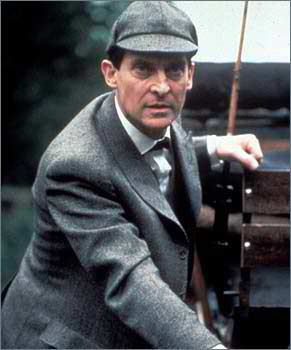 I enjoyed the Jeremy Brett Granada TV series (Smitty didn’t)  – this was the traditional canon done with all its creakiness intact. See, one of the unspoken realities is that an awful lot of the Holmes stories aren’t really much good – Doyle tired quickly of the potboiler mysteries. The character’s great but the stories vary widely. The Brett series did them all. Sometimes the adaptations were far better than the original stories, but sometimes they weren’t and that faithfulness sometimes proved a weakness.

Smitty and I both enjoyed the Robert Downey steampunk Holmes movies, though I don’t think they’re anywhere near as clever as the new PBS shows. Downey’s are Hollywood fireworks versions, just a romp, a couple of hours with popcorn. Both the Brett and the new PBS shows are better to my taste. 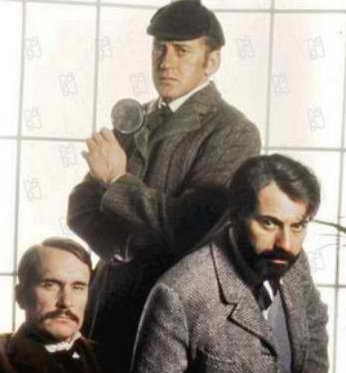 My favorite Sherlock isn’t readily available, though I managed to grab a (somewhat-legal) copy once in desperation. It’s ‘The Seven Per Cent Solution’ and it’s not a Conan Doyle story at all. The script was written by Nicholas Meyer (who wrote most of the decent original ‘Star Trek’ pictures) based on his own novel and it tells the story of how Professor Moriarty was in fact not Holme’s archenemy, how Holmes and Moriarty never went over Reichenbach Falls together, why Holmes disappeared for two years (Conan Doyle swore he was done with him and was forced to bring him back by the fans – but Meyer knows better).

It’s a brilliantly witty script with an amazing cast: Nicol Williamson as a very skittish neurotic Holmes, Robert Duvall unrecognizable as Watson, Sir Lawrence Olivier as Moriarty, Vanessa Redgrave at her most beautiful as Lola Deveraux and Alan Arkin as Sigmund Freud, who gets to say ‘Elementary, my dear Watson.’ Highly recommended if you can find it.

Watch the new ‘Sherlock’ – it’s terrific. And here’s to twenty more interpretations of this unquenchable character before we die.