The wildflowers had thorns.

It was the only flaw Katya could find with the place. She’d slept like a baby for the first time in years, delighting upon waking at the sound and smell of the sea, the long grass swaying in the breeze as she set out from the house.

Nils had told her the land would be the first step on her road back and she’d resisted mightily, haughtily. She’d felt exiled, abandoned. But now, trailing the Irish setter between gnarled trees and jumping from rock to rock across an inlet stream, she saw clearly for the first time in a long while.

Peace and Quiet. She couldn’t have imagined the possibility a week ago. No photographers would find her here, no journalists asking questions for which she had no answers. On a peninsula jutting into the North Sea, just she and the dog and Nils to follow later in the week—and balmier weather than she had seen in December in many a year—she could start a different life, at least for a while. What was it like to do nothing at all? To just let the hours unfold, like a rock or a bush or some unselfconscious thing? When was the last time she’d asked herself such a question? 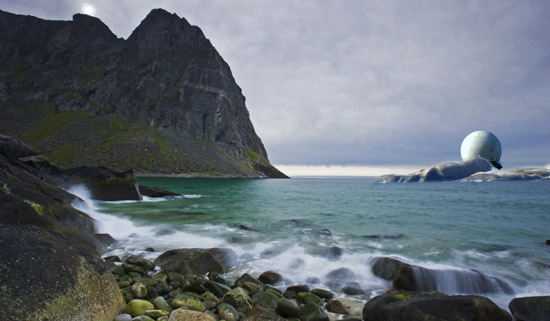 The waves were lapping over the dark stones. She skipped a few across the surface of the water and let a few raindrops run down her forehead to the tip of her nose. Darker clouds were moving in, looming behind the little island with its concrete dome. Was it an observatory? She’d seen the glint of a mirror inside that morning, peeking out the bedroom window. Of course, a really good telescope, even half a mile away, could beat hell out of all her daydreams of solitude but they seemed a geeky bunch, puttering back and forth in their little outboard launch every few hours. Not the kind to care about the trials of a Stockholm actress, even one weathering a tabloid breakdown.

The dog raced across the beach, skittering into the water and back, scattering clumps of foam and seaweed in every direction. She settled atop a large boulder, pulled the shawl over her head to keep the sun from burning and laughed a long free cackle at the vain seed inside her that worried about wrinkles while she couldn’t imagine ever stepping on a stage again.

But then, maybe she had reached a point where she could imagine imagining.

A moment later, she was flying through the air and crashing down onto a pile of stones. A torrent of wind and rain struck her sideways, drenching her from head to foot. When she regained her feet, welts aching all over her thighs and buttocks, she saw a path slashed clear across the breadth of the beach, a path where the stones were crushed into the coarse sand beneath. She followed the path with her eyes and found herself choking, heart in her throat. At the water’s edge lay the body of the dog, almost sheared in half, a line of fire sizzling up the middle of its back—and, out in the sea, on a straight course beyond the dog’s body, the observatory or what was left of it, the dome collapsed, mirror shattered, tilting at a crazy angle off its mount, almost invisible for reflecting the sky.

When the authorities arrived half an hour later, Katya was still rooted to the spot, spouting an endless babble to explain how she could possibly have heard nothing, seen nothing, felt only the momentary blast of wind and rain. The interviewers were patient and courteous, reassuring her that, not only would nothing she said ever appear in any public forum, never be heard by anyone outside the scope of the investigation, but that, in fact, she was never to speak a single detail of this to anyone, Nils included. They insisted on ‘replacing’ the dog.

Not that Katya was reassured in any way. Her head was now filled with far more frightening concerns than she’d ever found on the Stockholm stage.