There’s always mixed feelings when your children (in this case, my next book) go out into the world on their own…

They live, they love and they lie.

It was the night before Christmas and Nicky Marsh (a.k.a Sandler) is approached by a spy in the form of Millard Hastings at Sandler and Son’s year end function (insiders know this semi-legit shipping company as Swindler and Son)hosted by the inimitable Harry Sandler, or senior swindler.

Less than 24 hours after that, Marsh is running for his life (not literally… this is still Paris) from the French Police. His soon to be ex-wife Sara is thrown into the fray with him, again, not literally, these are French kidnappers.

Nick’s main priority is finding Harry to sort out the mess with the police but Harry is gone, plus it looks like he might be developing dementia. Harry’s lover, a useful computer geek is also looking for the senior swindler. And that’s just the beginning of it.

A few days later and the group are now running for their lives (literally) in a country where the penal code includes the chopping off of hands that steal. Or swindle.

Nicky plays the game the only way he knows how, by playing Harry’s Rules. He did not stack it or rig it or choose the players but he must play and play to win, or everyone dies. No. Really. I’m not being over dramatic. Everyone on the Arabian Peninsula – will die.

TED KREVER does not let us down, he hits the ground running and doesn’t let the reader catch a breath until the very end. The book is presented in the interesting (and in this case – fitting) format of an interview (read interrogation). If it hadn’t been we would have missed Harry’s Rules and I’m beginning to think that politicians could be playing by these rules as well.

Not that I’m comparing politicians and people of influence to swindlers… I would never do that.

Mr. Krever’s has a phenomenal plot with a horrific idea thrown in for good measure. However, the heart of the book is about love, don’t let the amount of guns and ammunition certain soldiers are carrying fool you. This is about a son’s love for his not-father and a couple who richotet (bad, really bad choice of words) off each other better than they would off a wall.

Told you. Really bad choice of words. And when all is said and swindled… That’s about all Nicky has to keep his head on his neck. Words.

I loved Krever’s characters, they are all created with heart and jolly good humour, before they diverge into their different skins. Like all good authors, I didn’t have to try to read a character, the character was shown to me.

The research and descriptions of places and objects are (happiness is within my grasp) 100% correct, I checked, he did his research good… But all the research in the world doesn’t help if you can’t put it together in a coherent story, and KREVER has done so, very well indeed.

I rate this book 5 stars with a strong recommendation to begin reading in the morning because you won’t put it down until you reach the end.

Shhhhit, it was dope, dog!

‘Swindler & Son’ will be available (in paperback and ebook) on Amazon December 16th! To pre-order or more details, click here!

‘Swindler & Son’ is only 99 cents for pre-order on Amazon this week!

The laugh-out-loud comedy about fraud, dementia, kidnapping, the looting of ancient relics, nuclear terrorism and love (after marriage)!

Get your copy now and tell your friends! You can even tell the friends you don’t speak to anymore! We all need a laugh! Oh, do we need a laugh…

Finally, the truth is revealed!

Netgalley is a site that makes advance e-proofs of books available to reviewers and bloggers ahead of publication–we writers hopefully get well-thought-out and well-written reviews in advance and bloggers get access ahead of deadline.

‘Swindler & Son’ is now available on Netgalley for a limited time! Click here for the Netgalley page.   Jump on it, reviewers!

I can be reached here for any questions or interview requests – just click on the email link on the sidebar.

I’m thrilled to announce my next book, Swindler & Son, will be published in December!

What happens to a confidence man once he’s lost his confidence? Nothing good.

The very first Birkin Bag, gifted by Hermes to Jane Birkin in exchange for the use of her name. The fabled first Porsche to win the Le Mans 24-hour endurance race. The Mona Lisa— not the one in the Louvre, the real one, stolen from that museum in 1911.

These are the types of items Nicky Sandler and his partner and mentor Harry provide to well-heeled customers from their base in Paris. Unique, legendary and—sometimes—even genuine. In such rarified territory, the line between fact and fiction gets very thin indeed.

But now, everything is going spectacularly wrong. Nicky’s new wife demands a divorce, citing a lack of transparency on his part. Harry is showing alarming signs of dementia, a fatal flaw in a con artist. And then, one night, Nicky discovers the French anti-terrorism task force camped out across the street from his apartment, eyeing his kitchen window, and has to go on the run to find out why.

A funny, romantic heist thriller in the tradition of Oceans 11 and the Thomas Crowne Affair, Swindler & Son is the story of a man with a gift for larceny, forced against his will to try to do the right thing.

Coming up between now and then: Lots more information about the book, print and audio excerpts, special low-price deals in pre-publication and an opportunity to read the book for FREE! in advance, in exchange for a review.

Don’t miss a detail! Fill out the handy subscription box that pops up when you visit this site (I know, I hate pop-ups to0. I also hate insurance companies and  the new enhanced emoticons but they aren’t going anywhere either…) The subscription link will make sure you find out about all the details.

If nothing else, you’ll learn how to scam rich people when you hit retirement. Think of it as a self-help book for those who are just fed up with yoga…

We went to a very small film festival the other night in Tribeca – an evening of independent short films, a real variety of style and subject matter. But this story stood out and I couldn’t miss passing it on. 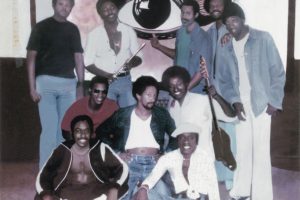 ‘Edge of Daybreak’ was a prison band, inmates (mostly) of the Powhatan Correctional Facility near Richmond, Virginia in 1979. They convinced the owner of a local recording studio to record their music. Only hitch was, the prison took one look at the studio (particularly, its multiple escape routes) and nixed any possibility of letting the boys loose there. They agreed to one five-hour recording session in the prison rec room, with armed guards standing a foot or two away from the band as they were playing. By this time, one of the band members had been transferred to another facility and had to be trucked back in on short notice for the session. Half the band members didn’t know there was to be a session until they were called down to play.

So, eight original tracks, no real time to rehearse, no time for second takes, no overdubs, the last song (‘Our Love’) performed after they’d been told to wind up the session. And the results are remarkable. The band is tight, several lead singers, tight harmonies, well-performed Seventies soul  music. If you polished up a few rough edges and told me this was a forgotten Isley Brothers record or other recently-rediscovered Motown classic, I couldn’t argue with you. Considering the conditions under which it was made, it’s astounding.

Here’s the short documentary by Alix Lambert that was played the other night. All rights to her and the band, none to me. The music is available on Amazon and, I’m sure, iTunes and other vendors. Please buy the music, don’t just stream it (stream it first if you want, to see if you’re interested, but understand that musicians make virtually nothing from streaming). Lambert said she’s working on a full-length documentary on the album and the band, all of whom are apparently alive, out of prison and doing well.

Pass it on; this is one of those feel-good stories like Searching for Sugarman.

‘Saving Brinton’ is one of those magical gems that comes along every once in a while, a slow-burning delight that starts with an individual, the kind of guy we might have been lucky enough to encounter in our travels –  a genuine, decent guy who often goes unnoticed in the let’s-make-a-deal cities – and then opens out to show how he tweaks the orbit of the planets, just a tiny glorious bit.

Michael Zahs is working his farm when we first see him, in Ainseworth Iowa. In his friendly, leisurely way, he establishes how he came by the Brinton films. William and Indiana Brinton had traveled around Iowa running projection shows (magic lantern slides, early movies and even a prototype flying machine that neglected to fly) in the 1890’s through 1911. When they died, their films went from their executor, who stowed them in the basement, to his executor to Zahs, who put them in a shed alongside his home and showed some of them every year in local shows around the area for thirty years, vainly trying to get someone to pay attention, until finally the University of Iowa recognized what he had.

What he had (film-lovers, prepare to gasp) were at least two Georges Melies films that were thought lost, several hand-tinted early color films in better shape than any the Library of Congress had previously seen, early footage of a train crossing the Brooklyn Bridge, Teddy Roosevelt riding in a parade and a Middle East market. Amazing stuff. Here’s a link to the film page, which will be updated as more films are digitized.

There’s a scene where the Library of Congress’s french film expert watches one of the Melies and exclaims ‘You want to see me faint?’

In the meantime, Michael plants his fields, buries his mother, gives history demonstrations that aren’t boring (!) to Iowa schoolchildren and a humorous presentation on cemeteries (!) to an assemblage of Iowa Amish, who trusted him enough to agree to be filmed. By the time you see it, that he’s earned their trust is not a surprise–as wonderful as the films he’s saved are, much of the film’s joy and grace comes from the opportunity it gives us to know the man.

Here’s the website again. But just go see this movie–you’ll leave with a really stupid smile plastered across your face, which is something we all need these days.

And if you live in Manhattan and can make it, go TODAY (May 18th 2018) to Cinema Village on 12th Street – the filmmakers and Michael are there all day to answer questions in their very gracious and charming way. Support good people doing good things – how many chances do you get?