On Staten Island, it’s called The Boat. ‘Does this bus go to The Boat?’

The Verrazano-Narrows was once the world’s longest suspension bridge and is still the start of the New York Marathon but nobody calls it The Bridge.

We’ve got other bridges. Some people even like the lowly Bayonne Bridge, which Tom Cruise destroyed without much complaint in ‘War of the Worlds.’

The Boat, on the other hand, is a relaxed trip through the harbor of the City That Never Relaxes.

Smitty, my girl, loves the Ferry, has ridden it since she was a little girl, when it was a free trip to someplace else (someplace else being Staten Island may account for her not becoming the travel freak I am).

I’ve ridden the Ferry for twenty years and quite a bit lately to visit Smitty in Manhattan. I almost always ride up top. The upper deck offers an expansive view of the harbor and a nice breeze. There are seats outside for good weather. Smitty is tolerant of my foolishness but told me she religiously rides down below. 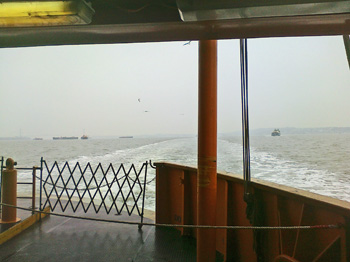 So, since she is usually right about everything, when I rode the Ferry last week, I took the long staircase down to water level. And onto the back deck, set up to take cars, a memorial to the days before  9/11, when that service ended for good.

And standing on that back deck, after twenty years of thinking I knew what the ferry was, my ride was transformed. The engines were roaring, the deck was vibrating, the boat was rolling in the waves.

Tugboats passing are cute little things from the top deck. Now, they were powerful squat fireplugs, chugging past across that long flat waterline. Anything bigger than tugboats loomed. 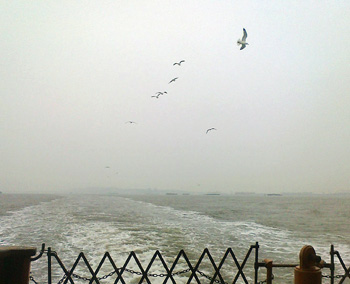 It was being in the middle of a field with horses prancing around after years of watching them safely from behind a fence. Everything was close-up, visceral. No distance, no safety. The power of nature and man’s inventions shown clear all of a sudden.

A growing flock of birds hovered over our wake, swooping and diving for a mid-day meal in the churn behind.

That’s when I came upon this. 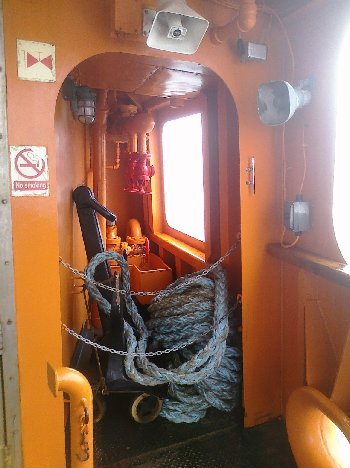 For the landlubbers (I’ll bet that’s a sizeable majority), this is called an anchor. As I was staring at it, an Asian man in Ferry uniform came out the rear doorway.

“Is that really the anchor?” I asked.

“That?” he laughed. “That’s for emergencies. You throw that over, we’re done. Not going anywhere. And no way to pull it up.”

I took another look and realized, no winch, just a heavy piece of metal at the end of a long rope.

I’ve been trying ever since to think of a logical circumstance that might call for immobilizing the Ferry in the middle of the Harbor with no chance of retrieving the anchor. On the other hand, this is the city that supports the Mets… If you’ve got answers for either of these conundrums, let me know. I’ll print any good ones I get.

In the meantime, whenever you’re in New York, I recommend the Ferry. Ride Down Below. Because Smitty’s always right – and now, so am I.