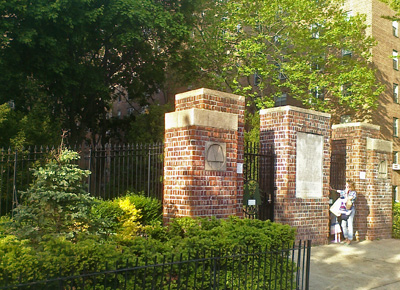 I was walking with Smitty on the Lower East Side the other day and we passed the housing development she and her sister started life in (before moving down the street).  The place is one of several affordable-housing complexes built in the area to replace the earlier slums.

It’s now fancy coops, of course. Because these days, if a place in Manhattan has a little character (or is just old), it’s ‘historic upscale housing’; if it’s new, it’s ‘upscale housing for the 21st Century’. Everything in Manhattan is upscale; real estate agents are only interested in selling to the Masters of the Universe. You’d rather have your place go empty than scare away the Goldman Sachs/Sidley and Austin/McKinsey/Facebook types by inviting a few working people.

Nonetheless, the plaque on the gates leading to the inner garden and playground where she used to play is riveting to me: 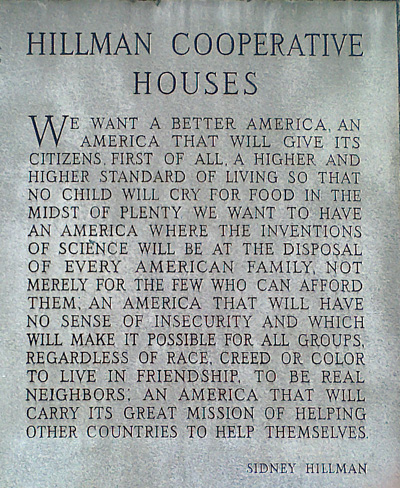 Sidney Hillman was the head of the Amalgamated Clothing Workers Union and one of the founders of the CIO. He was born in Lithuania, escaped Russia after their first attempt at revolution failed in 1906, fought battles with labor-hating businesses and with rival union leaders once he arrived here. He was a Communist and a man who had dealings with gangsters before orchestrating a city government crackdown on them. 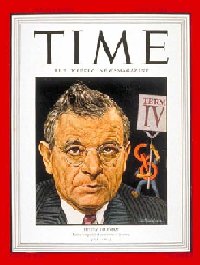 So it’s all the more remarkable, knowing what a tough guy he had to have been, to read the words on that plaque. Who would dare write such a thing today? What public figure would dare that kind of naked idealism? ‘We do it because it’s a good thing to do. It’ll help make a better world.’ Today, you’d be laughed at – and there’s our flaw as a nation.

What do you have left when you banish the idea of trying to do better because it’s better? What world do you create when the only motivation people don’t laugh at is money?  Compare Google’s ‘Don’t Be Evil’ slogan (and its not-unwarranted assumption that most business is) with Hillman’s vision.

I wonder how many of the people who live in the complex have ever read the plaque alongside their gate. I wonder how long it is before some practical businessman takes the damn thing down.