Two NYPD officers were shot dead Saturday. Their blood isn’t cold yet. Apparently the man who shot them made ‘anti-police postings’ on Instagram before he carried out this assassination.

Pat Lynch, the president of the Policeman’s Union, wasted no time last night saying there was “blood on their hands [of] those that incited violence on the street under the guise of protest … [blood] on the steps of city hall, in the office of the mayor”.

“When these funerals are over,” said Lynch, “those responsible will be called on to the carpet and held accountable.”

I was proud of the NYPD this past week or so, since the Ferguson and Garner decisions. Their treatment of the protests in this city was respectful and cautious. They were professional and positive. Anyone who wanted to stereotype them negatively had no ground to stand on. The protesters who attacked two police officers earlier this week were seen by most everyone as morons who deserved to be put away for what they did. We felt those were our police – because they acted with restraint. 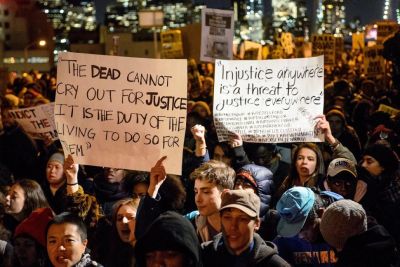 It would have been wonderful if Mr. Lynch had woken up this morning and had the good sense to say “Sorry, I was overcome with emotion last night. I spoke out of turn. Most protesters are trying to make a better world for their families; most cops do the best they can and we all have to work together to weed out the members of both groups who don’t.” It would have been great if somebody had talked that much sense into him.

But of course that didn’t happen. Today instead brought statements by Rudy Guiliani and Scott Brown (and I’m sure plenty more) screeching that the problem is ‘divisive rhetoric from the White House’ and City Hall. Groups of police were shown turning their back on Mayor De Blasio arriving at the scene.

Nobody in any official capacity incited violence. De Blasio and Obama said nothing divisive. What they did – a sin beyond redemption – was acknowledge that not every police officer does the absolute 100% totally correct thing all the time. They made it worse by suggesting that, when police officers screw up, it’s appropriate that they be indicted and stand trial like the other 98% of the population.

A policeman has a difficult, near impossible job. He deals with bad people all the time and good people only at their worst. He is charged with protecting us from unforeseeable dangers and blamed for every bad or even imperfect decision he makes under continuous, extreme pressure. I get that.

But that’s the job, tough. You don’t want to live with that, don’t do it. Be an electrician, a plumber, an architect, a soldier, a writer, I don’t care. When you take on the badge and the responsibility, we demand you be responsible. We demand you live up to that job. And most cops do most of the time. But when dumb cops – or good cops, for that matter – screw it up, they have to be indicted the same way we would.

I said indicted, by the way, not convicted. The protests were over lack of indictments. The man gets a day in court, he gets the chance to tell us all why he did what he did. Maybe we all learn it’s not so easy. Maybe some cops realize that what sounds funny and right in the station house doesn’t always sound so good when you’re saying it out loud to the people you’re supposed to be protecting.

Grand juries indict 98% of the individuals brought before them. They indict 1% of the police officers, even when they shoot unarmed civilians, even when they choke them to death using an illegal hold on videotape.

In a world that pays bosses $100 million a year while workers struggle to get by,

-where Walmart has managers on public assistance while the Walton family has as much money as the bottom 42% of the American population,

-where citizens defaulting on their mortgages lose their homes and savings while the banks that sold securities based on those fraudulent loans get bailed out and pay hundreds of millions in bonuses the same year,

-where a man gets tackled by a gang of cops for selling loose cigarettes while Jamie Dimon can call the Attorney General’s office and have them postpone an indictment against JP Morgan Chase over $7 billion in fraudulent transactions because when Jamie Dimon calls, they pick up the phone and say ‘Yes, Sir!’

– in a world like that, the bottom-line issue for a whole lot of us is fairness.

We’re fed up with a system that’s rotten and corrupt to the gills and that is treating us like what’s left on the bottom of someone’s shoe at the end of a rainy day. So it’s not your guys, Pat Lynch, it’s certainly not just your guys – but the cleansing starts here.

The favoritism ends, the favoritism that’s everywhere, has to end and it’s the rest of us, the millions of the rest of us, who are demanding that guilty parties large and small be called on the carpet and held accountable. Not just the powerless ones, not anymore; we want to see in the block even the ones who can call the Attorney General or pull out a police courtesy card.

That’s how this is all going to end. It can take a while or it can happen fast. It can end with political reform, voted in by the legislature and signed in polite solemn ceremonies by humbled politicians – or it can end with rows of guillotines in the public square and who the fuck knows whose head is coming off today.

Let’s all acknowledge it would be really horrible if it turned out to be the latter.

The difference between one and the other might be restraint on all sides, not escalating at a reflex, not tarring everyone you disagree with because of the tragic acts of today’s headline lunatic, but instead making an effort to understand how the other side feels. Believe it or not, Pat and Rudy and Scott and Bill Bratton and the good cops I see on the streets, I’m trying real hard to see your side.

Try a little harder to see mine. Please.