I swear I’m going to start writing about something other than Mindbenders and politics sometime soon.

However, in the meantime…

I worked in print and broadcast journalism for over twenty years. I think journalism is a calling or should be, but I’m an idealist and this is not a world made for idealists.

I’m frustrated by the devolution of media now. It all started with the rot of Fox News, which is simply propaganda that starts with a viewpoint set at the top (if there was liberal bias in the old media, it wasn’t top-down; it was the result of producers who’d traveled the world telling you how things looked from their point of view) but, because the others just aped Fox without yelling as loudly, they’re all consumed in rot now.

WV primary yesterday: Bernie 51%; Hillary 36%–seriously, if the margins were reversed, you don’t think the headlines would scream “Clinton Devastates Sanders”, with calls for him to get out of the race forthwith?

What do we have instead? The NY Times shoves a tiny item into the news capsule at the bottom of the front page saying ‘Sanders Wins in W Virginia’.

Journalism typically loves the underdog. Here’s the underdog of underdogs–the 74-year old Jewish socialist from a tiny state with no big money backers–beating the overwhelming favorite after she’s already pivoted to November and the media has already counted him out. Damn Bernie doesn’t know when he’s supposed to roll over and play dead…

There’s a much bigger article on that front page about Hillary ‘suggesting she would like to give people the option to buy into Medicare.’ The Times goes on to say: ‘Mr. Sanders calls his single-payer health care plan “Medicare for All.” What Mrs. Clinton proposed was a sort of Medicare for more.’

And there’s the difference between the two Democrats–and it’s a world of difference. Hillary, after much prodding from Bernie, is willing to consider letting some people ’55 or 50 and up’ to voluntarily pay their way into Medicare.

I’m not an economist–I can barely make change most of the time–but I know this doesn’t add up. Remember that, in Obamacare (which was written by the insurance companies, folks), the catch was that everyone from age 26 on had to have insurance so they premiums from the healthy younguns would pay for the older folks with more diseases (because God forbid the insurers might actually have to pay out some money to the people who keep paying them). 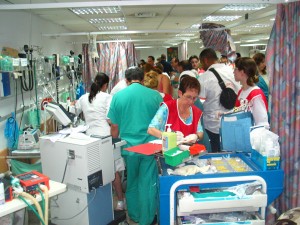 So now, you’re saying you’re going to let a subset of middle-aged people, already seeing the mileage pile up, join the pool–what’s that going to do to costs? It’s certainly not going to make things markedly cheaper, is it? The pool of cheap insured, the ones who would help pay for the older folks, remain in Hillary’s plan in the clutches of private insurers, which brings up their profit margins (they’ll love this plan) while the Republicans moan how expensive Medicare is, we should just jettison it for some grant that won’t pay for anyone!

What are we protecting here? Private health insurance? I understand there are jobs involved but if there’s a more blood-sucking parasitic industry out there, I don’t know what it is.

On the other hand (you knew I’d get here, didn’t you?), Bernie’s plan is to put everybody on Medicare immediately. Tax all of us a bit more (and the rich a lot more, basically on par with what they paid under that notorious high-tax monster Ronald Reagan) and eliminate most private insurance, copays, referrals, surprise $10,000 bills from anesthesiologists who don’t take your insurance (and nobody bothered to tell you) and the idea that the elderly should have to liquidate everything they own before their insurance companies should have to pay back on the policies those elderly folks have been paying into their entire lives. Do we really consider the amount of hell we put ourselves through to preserve the profit margins of insurance companies? Did I use the phrase ‘blood-sucking parasitic industry’? Did I use it enough? I think not. 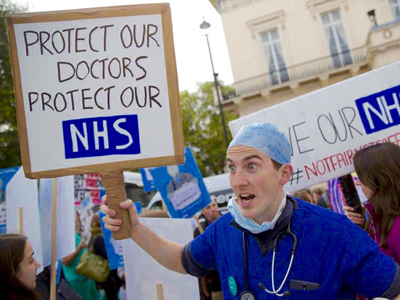 Bernie’s plan is for everybody. Because everybody would be in it, the costs would be spread among the entire population, the costs of drugs would be negotiable with the federal government like they are with any other national health so they would go way down. More importantly, the principle would be that health care is not about profit. This mania that everything is about profit would be dealt a serious blow.

I want that. I want to see that happen. I don’t know if it can and I don’t know why I’m writing this since all the algorithms tell me conclusively no one will read anything this long.

I finally have a candidate (for the first time since 1976) that I don’t have to hold my nose to vote for. I’m going to continue to contribute and hope for California. I’m going to hope that something shakes the nest of the entrenched and powerful and makes them realize that the anger of the populace is not going away. I may end up voting for Hillary instead of Trump because I’ll have to. But I’m not there yet.