One of the first decisions I made about ‘Mindbenders 2: The Fiery Sky’ (publishing on Amazon March 12th–click here for details and to pre-order!) was that the three members of the Mindbenders team would split up right after the conclusion of the first book, under hot pursuit from the CIA, MI6, Interpol and L Corp, their most dangerous enemy.

So, starting sketching the new book, I had the very entertaining duty of trying to figure out where I’d want to go if I wanted to disappear. Personal preference–like the fact that I hate the cold–ruled out some extremely promising locations, like Patagonia or the Sandwich Islands. The US, Canada, Japan and China all seemed too ‘wired’ for someone who wanted to become invisible.

Google Earth is the thriller writer’s friend. I started sliding around the globe looking for places that seemed remote but not so primitive that you couldn’t get out quickly if recognized.

And then I realized that the safest place to hide was in a place where nobody would expect you to be truthful about your identity. In our world, such places aren’t hard to find, particularly where the gold rush (whichever one) is local. Shortly after, I found this:

A village on stilts, jutting off the edge of an island. Attached to Nature but not of it. Within disputed territory, so under no flag. Filled with people with a reason to be there–which is to say, with a good reason not to be anywhere less remote. 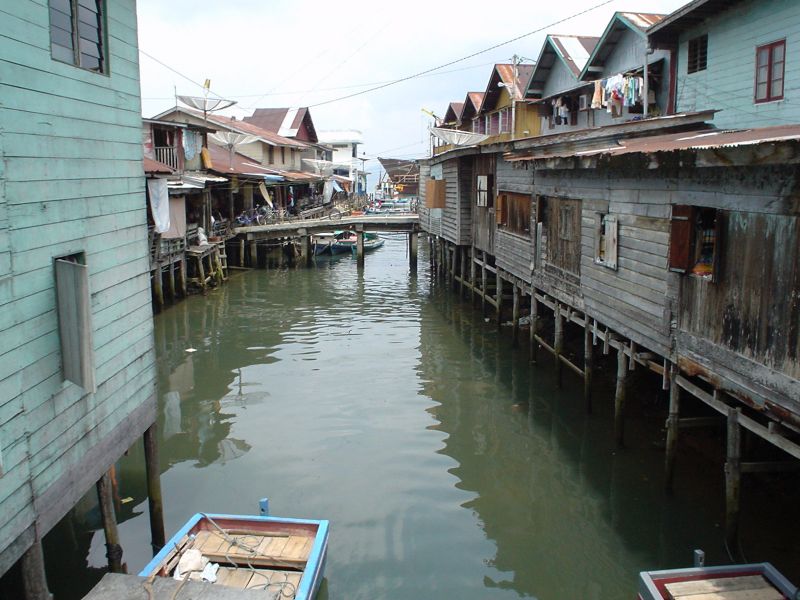 The pictures fascinated me and filled in all my questions. I wrote far more material about the place than what ended up in the final book.

By the way, the two pictures above are of two different villages, hundreds of miles apart and technically in separate countries. This kind of living has spread across the sea basin.

I even found a video. It’s nine minutes and in the middle of a real city in a real country but the living-on-stilts is pretty vividly portrayed:

So this is the first of a few locations I’ll highlight. I think this is the most exotic; nonetheless, they all have their fascinations.

In the meantime, read a sample of the new book here!